The global surge in demand for palm oil is the leading cause of deforestation in Sumatra and Borneo, threatening endangered plants and animals including orangutans. We want to enhance consumer awareness about how our daily habits are the root cause of this irreversible rainforest destruction and explain how a small change in our behaviour could protect the rainforest and save orangutans. 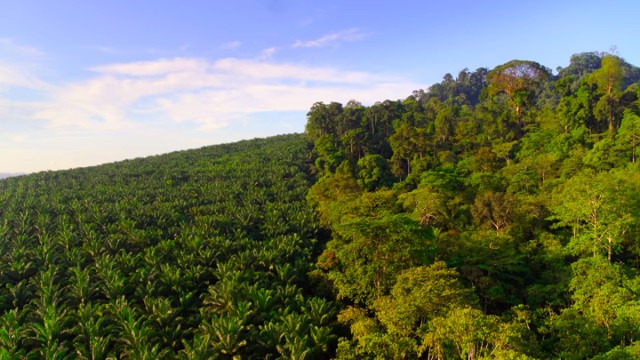 Content hide
1 A brief introduction to Palm oil
2 Why is Palm Oil an issue at all?
3 Palm Oil and Tanjung Puting National Park
4 Then Why Is Palm Oil Used?
5 Which Products Contain Palm Oil?
6 How Can You Fight Palm Oil
7 A Final Word

A brief introduction to Palm oil

Palm oil is a type of vegetable oil that comes from the palm fruit, which grows on the Elaeis guineensis or simply African oil palm. Palm oil trees grow naturally in tropical forests, and originate from west and south-west Africa. 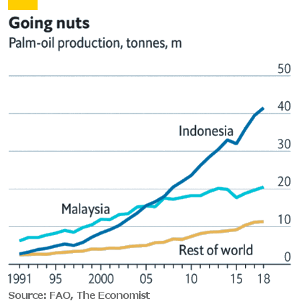 Especially in Indonesia palm oil production has soared in recent years. It is a significantly more profitable commodity for farmers than traditional farming and has helped lift many people out of poverty. According to Indonesia’s Ministry of Industry, the palm oil industry employs 4.5 million people, and is the single biggest export product of the country.

Why is Palm Oil an issue at all?

Palm oil is a major driver of deforestation of some of the world’s most biodiverse forests, destroying the habitat of already endangered species like the orangutan, pygmy elephant and the Sumatran rhino. In Indonesia alone, a forest area the size of Belgium is lost every 2 years (let this sink in).

While the deforestation directly contributes to the population decline of orangutans, the good news is that orangutans are resilient and can adapt to some level to new environments such as palm oil plantations. However, deforestation severely deteriorates the orangutan population indirectly through the increased killings by farmers protecting their harvest and through the new infrastructure making it easier for poachers to get further into the rainforest.

A recent study from 38 international institutions found that nearly 150,000 orangutans were killed in the period 1999 – 2015 in Borneo. In the last 75 years, the population has dropped by 80% to an estimated population of 104,000 orangutans on the island. And according to the researchers it will further fall by at least 45,000 by 2050 due to habitat loss alone without fresh efforts to protect them.

Palm oil is a major source of CO2 emissions

In preparing rainforest land for palm oil plantation, the most valuable trees are cut down and removed first. What remains is burned. Tropical deforestation is currently responsible for about 18 percent of greenhouse gas emissions according to the IPCC, and the plantations to produce it account for 10% of permanent global cropland .

The USA ranks the palm oil industry as one of the worst for forced and child labour , where children “carry large loads of heavy fruit, weed fields, and spend hours every day bent over collecting fruit from the plantation floor” for little compensation. The Indonesian government claims that “thousands of communities are involved in conflicts with companies, the state and each other” consequent to the industry.

While Central Kalimantan has one of the fastest rates of oil palm expansion in the world, an unaware visitor to for example Tanjung Puting National Park – where we offer Borneo orangutan tours – may not even notice this.

If you look closely, though, you will see that as you cruise through the Sekonyer river that the Tanjung Puting National Park is on one side where you will have all the activities, while the other side is private land with palm oil trees.

We have noticed that some of our clients in Tanjung Puting National Park tend to blame “palm oil farmers” for the harmful effects of this industry to the rainforest destruction and the killing of orangutans.

While we understand this sentiment, we also recognise that local farmers simply try to keep themselves and their families out of poverty. Moreover, harvesting palm oil on private land is not an environmental issue if that land was already used for agriculture.

But then whom to blame? Well, it’s a complex issue, but instead of pointing at farmers, we think it is better to increase scrutiny on the following players:

Then Why Is Palm Oil Used?

Palm oil simply serves the global demand for vegetable oil, accounting for about half of all packaged products in the supermarket according to WWF.

Compared to other vegetable oils such as soy, rapeseed, coconut or corn, palm oil has a superior yield and it produces up to 3-8 times more oil per unit area! Its high melting point make it smooth and easy to spread and it is the cheapest vegetable oil to produce and refine.

FIGURE 2. A comparison of the land efficiency for different vegetable oils relative to palm oil.

Therefore replacing palm oil with other oil crops would just displace the damaging biodiversity losses, rather than end the ecological destruction associated with palm oil .

It provides the foaming agent in virtually every shampoo, liquid soap or detergent. It is widely used in tooth paste, frozen meals, sauces, oat meal and cleaning products. The below illustration gives you an impression of how you consume palm oil on a daily basis. 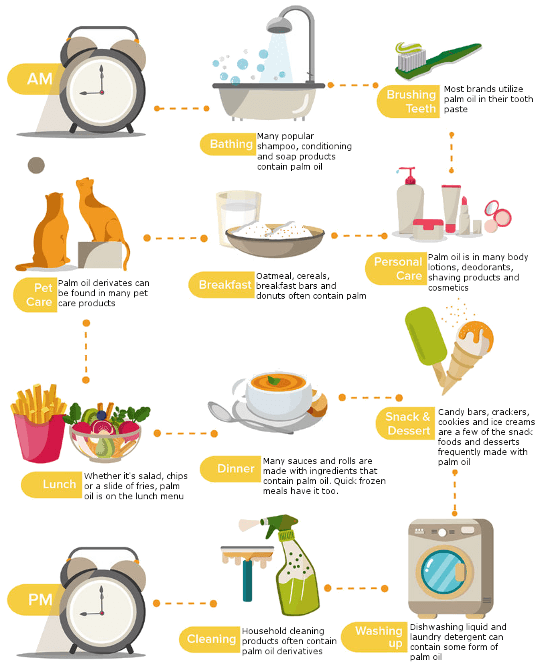 FIGURE 3. A Day in Your Life with Palm Oil, based on a design by Philadelphia Zoo (edited for readibility).

Yet, most consumers are not aware of their immense palm oil consumption, and even if they want to be more conscious about it they struggle because palm oil is rarely clearly labeled in the ingredients list.

Many products that use palm oil aren’t clearly labeled. Palm oil and its derivatives can appear under many names. Here are some of the used synonyms for palm oil according to the WWF.

How Can You Fight Palm Oil

The most effective solutions come from the demand side as suppliers are going to keep clearing forests until consumers force them to stop. Consumer awareness is needed about the link between the purchased products and the environmental disaster they’re causing. Beyond these generalities, here are 4 concrete actions you can take:

The most effective measure is simply to reduce your palm oil consumption. Use fresh ingredients for your meals as opposed to frozen dishes or processed food and switch your hand soap, tooth paste, shampoo or brand of biscuits to a sustainable alternative.

With such small changes to your shopping habits, you reduce your palm oil consumption and influence directional changes for global corporations.

2. Look for the RSPO Label

Major palm oil producers, consumers and the WWF established the Roundtable on Sustainable Palm Oil (RSPO), which is a certificate for palm oil that is produced in a sustainable manner. 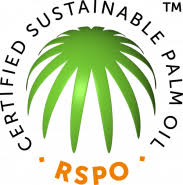 There are still some issues with the RSPO label. It does not rule out the clearing of the rain forest, climate protection is ignored, compliance with the criteria is not consistently reviewed, and violations are rarely punished. Greenpeace even considers the RSPO to be “little more than greenwash”.

Nevertheless, it is the strongest certification for sustainable palm oil. Moreover, the RSPO management recognises the criticism and tries to address them with the help of NGOs.

If you aren’t sure whether a company uses sustainable palm oil as an ingredient, use the rating tool of the WWF.

Fortunately, there are many bright conservation organisations, activists and communities fighting the palm oil industry and rehabilitating wildlife suffering from it. Think of International Animal Rescue, Rainforest Action Network, Friends for National Parks Foundation and Save our Borneo.

However bright they are, this is a fight between David and Goliath and they depend on kindhearted volunteers and sponsors. Make a difference by financially supporting them.

You may think “Isn’t the most sustainable way of travelling, not to travel at all”? Mass tourism has severely impacted Indonesia, with fresh water reserves cemented for hotels, beaches littered with debris from revellers, and wild animals captured and displayed for entertainment.

While not travelling has the least direct environmental damage, the indirect damage could be much worse as it forces local governments to find other income streams and further strengthens the palm oil industry.

Instead, we advice to travel sustainably. Ecotours incentivise locals to conserve the rainforest and not destruct it. Choose a tour operator that genuinely cares about the environment. Read more about the importance of ecotourism in this post.

It’s surely our responsibility to do everything within our power to create a planet that provides a home not just for us, but for all life on earth.
– David Attenborough –

We have written this article to enhance costumer awareness about the devastating effects of our daily lives on the beautiful rainforests and wildlife in Indonesia and Malaysia.

We realise that we only reach a very small audience and that our contribution is tiny. But if we all would make a tiny contribution, couldn’t the sum add up to something immense? Couldn’t we make the difference together?

We only reach a small audience. Please help us spread the awareness and share this article with your network.

Want to see orangutans in untouched rainforests? Explore the jungle with us in Sumatra or Borneo.
Slide
Responsible Tourism
We apply the 3 pillars of ecotourism in everything we do.

We fight for our rainforest and donate to wildlife rehabilitation programs.

Our tours and donation campaigns are built on community engagement.

Enhance your cultural and environmental awareness via our tours and eco blog.

Have booked the excellent guide Budi for a few days with my mother and my fiance and was more than satisfied what our guide Budi shows us. He is very professional and knows so much about the torajan history, which he explains in an good english very enthusiastic (he loves his job, the nature and ...

Me and my family first did an orangutan tour with LG in Kalimantan, and we were so incredibly amazed about the thorough (really unprecedented to me!!!) service and their positive mindset, that I decided to visit another location in which they also offer tours -> Tana Toraja. Wow! While everyone visits the casual burial sites, ...

3 days 2 nights was the perfect amount of time, spend the days searching for animals and the nights in a shanti camp, eating well prepared meals, with some card trick entertainment. Anytime less than this trekking you get stuck in a bit of a tourist trap at the semi wild orangutans and in season ...

Our boat tour in Tanjung Puting with local guides was perhaps the best holiday experience i have ever had in my life. Therefore we decided to do the komodo boat tour also with local guides, and again they were truly amazing. Upon arrival in Labuan Bajo, me and my family were picked up from the ...

We did a 3 days/2 nights trek with our guide Randy. He was so helpful, was constantly looking for animals and told us everything about the flora and fauna. Also, he was really considerate about if we could keep up. We saw many different animals and beautiful nature. The camps were also really nice, the ...

This tour was more than we expected ! Beyond imagination…and it is not only about seeing orangutans and other animals. Delicious food, comfortable setting included shower and toilet (!) , fantastic service and endless serenity … I don’t what I like more seeing those beautiful creatures or just be taken away by boat cruise on ...

If you want to go on a wildlife tour you never will forget, then take a trip with Local Guide, deep into the jungle! We did a 4 days / 3 nights trek inside Gunung Leuser Nationalpark, mainly to see the Orangutang. But, wauw, we got so much more! Ofc. Wildlife is never something you ...