While orangutans are known for their intelligence and peaceful character, it is sometimes overlooked how their personalities vary significant across individuals… just like humans. Meet here the fascinating personalities of some of the orangutans around Bukit Lawang in Gunung Leuser National Park. 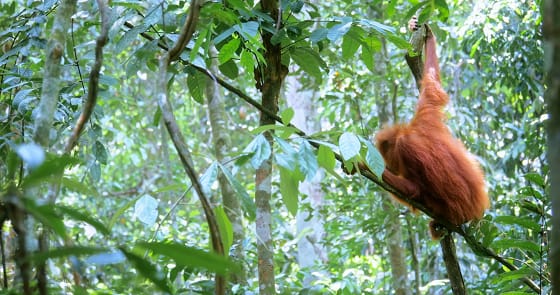 Because of the past orangutan rehabilitation initiative in Bukit Lawang, some orangutans in Gunung Leuser National Park at the side of Bukit Lawang are semi-wild and live peacefully aside humans.

While the rehabilitation centre has been closed in 2002, the reintegrated orangutans and their offsprings are still monitored by rangers. These semi-wild orangutans usually have names; the wild orangutans that live deeper into the jungle and who are harder to spot, usually do not have names.

The Orangutans around Bukit Lawang 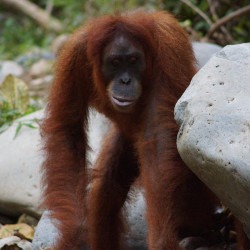 Jakie (|1996). She is the darling of Bukit Lawang and always in need of love from the guides and tourists, because of her past. Born in the wild in Gunung Leuser National Park, her mother got sick when Jackey was only 2 years. She was fed and raised by rangers and volunteers for years and got accustomed to humans. Ever since her reintegration back into the jungle, she has always kept her affection to humans. Jakie is the mother of 4 children: Darma (|2005), Jodie (|2009), Jeniper (|2015) and Johny (|2019), who is still with Jakie. 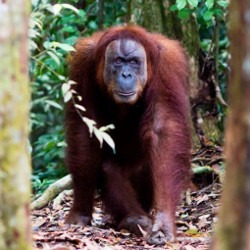 Mina (|1979). She has suffered in her childhood in captivity. Despite being taken well care of in a rehabilitation center since her 4th, she has never overcome her fear towards humans and therefore she can at times be aggressive. Nevertheless, she has had a successful life after her reintegration, giving birth to 4 offsprings: Thomas (|1991), Juni (|1998), Cetrine (|2008) & Masjur (|2014). As a proud (grand-)mother, she still looks after her family and therefore sometimes shows signs of aggression towards people that get too close to her. 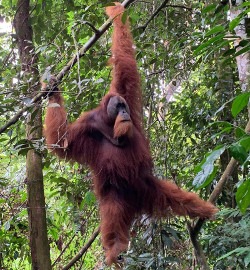 Ucok Baba (|1982). Afraid from tigers, Ucok Baba is always high in the trees. The only exception he makes when there are people as he feels protected by humans. While born wild, he has become semi-wild because he has been fed by visitors and lost his fear towards humans.

While its kindness towards humans is touching, it is sad that he has become semi-wild and that some visitors or guides feed orangutans for a nice picture or for a better tip, resp. At Local Guides it is prohibited to feed orangutans. Instead we educate visitors about the dangers of feeding or touching orangutans. 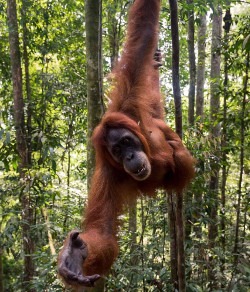 Pesek (|1988). While she has had a difficult childhood in captivity, she has been very happy ever since she arrived in the rehabilitation center in Bukit Lawang. Now she is a semi-wild orangutan that loves people. She is currently raising her daughter Palentino Rosi (2013) and is therefore more defensive than usual, which is normal behaviour for a mother. As children usually stay with their mother for ±6 years, Palenfino Rosi is not expected to stay much longer with her. She is also the mother of 4 grown up and wild orangutans: April (|1997), Hirim (|2001), Alam (|2003) an Wati (|2006). 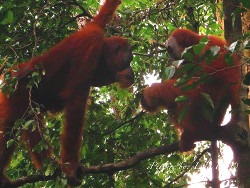 Gay Couple. This wild, gay couple lives deep into Gunung Leuser National Park. Although they also mate with females, deep into the jungle it is not always easy to find other orangutans. So when there is no female around, they just have sex with each other. Locals jokingly refer to this practicle couple with the song “No Women, No Cry”. 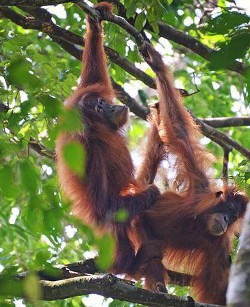 Loud Couple. This couple is wild and lives deep into the Gunung Leuser National Park. They are the exception to the usually solitary behaviour that orangutans are known for. When they have sex, they can be very loud and make similar sounds as when humans have sex. And just like humans, they want privacy during their intimate moments together, but their panting and loud screams of excitement can give their location away to curious visitors who quietly witness their performance from a distance behind the trees.
Read about the Bukit Lawang Orangutan Trekking Tours by Local Guides
Very Friendly & Helpful Guides

We had very high expectations of our Tanjung Puting tour, and it still exceeded our expectations! While cruising along the river sekonyer using klotok, we saw many bekantan and birds. The first feeding place there were some orangutans in tanjung harapan station, and then we set out again down the river and staying near the ...

I contacted Sal well before my holiday started, and since the beginning he has been nothing but great, thoughtful and creative to find the best solution for my trip that me and my family wanted. The 3 days tour on a boat in the Borneo jungle have turned out to be the best memories of ...

We booked a 4D/3N tour quite late into our planning as we had to move our plans following the earthquakes in Indonesia. Both the staff at Local-Guides and our assigned guide Nur were incredibly helpful before the trip began and provided lots of information to us. We stayed a night in Pangkalanbun before we set ...

I am a very low-budget backpacker and therefore I traveled through Tana Toraja for 2 days without a guide. However, I got the feeling that I was only visiting tourist places while my impression was that there was so much that the area offered which is why I decided to contact local guides. And I ...

3 days 2 nights was the perfect amount of time, spend the days searching for animals and the nights in a shanti camp, eating well prepared meals, with some card trick entertainment. Anytime less than this trekking you get stuck in a bit of a tourist trap at the semi wild orangutans and in season ...

We were looking for a very authentic experience, where we would not only see some cultural highlights but also feel the iranian culture and be among the iranians. For these reasons we booked our Shiraz tour with local guides, and they did not disappoint at all! We had a young iranian lady as our guide, ...

Local-Guides helped us incredibly with all our questions beforehand via email, and always replied promptly, enthusiastically and patiently! We booked through them also a very comfortable (airco, shower) accommodation, beautifully bordering the jungle, for a supergood price. And our guides were spectacular! Firstly, I was positively surprised that despite the good price we had, we ...

In A Nutshell. To curb the spread of the corona virus, many countries have at the time of writing imposed social distancing restrictions, strongly affecting the travel & tourism sectors. While a luxury for travellers, tourism is the primary source of income for many locals in Indonesia. Their incomes have been wiped off by as […]

Local Guides is a network of local guides that offer tours in remote places and which can be booked in advance against local prices. This keeps traveling costs down and helps local businesses. And because only guides with a terrific track record can join our network, travelers are guaranteed the best tours.

And we are expanding! So in case you are looking for a local guide in any other location, let us know! 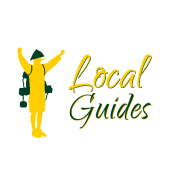